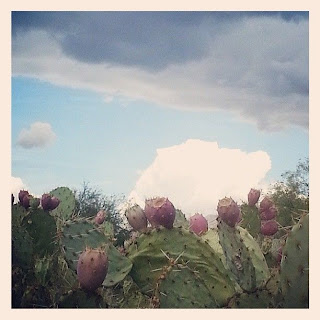 Monsoon Reading with THEBOOKJEANIE July has mercifully brought us monsoon rain in the desert and there's no better time to sit on your windowseat with a good book, glancing up every now and then to catch the flashes of lightning and to appreciate the brief but intense afternoon downpours . Many thanks to my talented artist friend for sending me this dramatic photo taken just before a recent storm. Wherever you are, enjoy the gift of rain this summer.
A perfect mingling of water and books at the Cincinnati Public Library.  And a cool refreshing spot for summer reading. . .


And now for some reviews
It is 1939 and war is on the horizon but British freelance journalist John Russell is determined to stay in Berlin near his son Paul and his longtime German actress girlfriend Effi, despite the dangers that he faces. The past 15 years he has reported on the rise of the National Socialist Party and the emergence of its current leader, Adolph Hitler, but now he is forced to report on human inte…
Post a Comment
Read more
- July 15, 2013 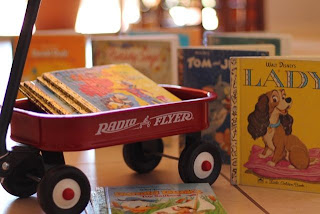 
The Smithsonian Institute presents a retrospective exhibit through January 5, 2014 in its American History Museum,  tracing the creation and history of the Golden Books for children. Golden Books put colorful books in the hands of thousands of children after World War II by designing and producing small affordable editions of traditional folktales and nursery rhymes, as well as new modern stories. The exhibit includes artists' proofs and rare early copies of classic Golden Books. http://www.si.edu/exhibitions/details/Little-Golden-Books-4942


And if you would prefer to wear your Golden Books, Ryan Jude Novelline has created a gown made entirely from pages of Golden Books, the bodice trimmed in the classic gold binding.  Oh, to have worn this to the prom!
Now for some reviews. . .

Shirley Falls, Maine was once a propserous mill town but now the industry is gone, the residents aging, and newly arrived Somali immmigrants are struggling to be und…
Post a Comment
Read more

- July 02, 2013
Head to the beach with THEBOOKJEANIE
What could be better than a literary gathering on a picturesque island with sandy beaches, dramatic cliff walks, and delicious seafood?  The Martha's Vineyard Book Festival takes place on, August 3rd and 4th, in the towns of Chilmark and Edgartown, sponsored by the Bunch of Grapes Bookstore and the local communities, totally free to the public. Speakers are coming from across the country including Pulitzer Prize winner, Richard Russo, as well as other notable journalists, novelists, biographers, historians and essayists.  Many of the presentations will be held outdoors under tents, perhaps with a sailboat skimming by in the distance.  If you can't make it this year, mark your calendar for the next festival to be held in 2015.    Check out the website and dream. . .  http://mvbookfestival.com/

After the death of his wife, eighty-year-old New Yorker, Saul Horowitz, reluctantly takes up residence in Oslo with his beloved granddaughter, Rhea, and …
Post a Comment
Read more
More posts

Jeanie Colaianni
Tucson, AZ, United States
After graduate school I backpacked around Europe and ended up living and teaching in London for the next four years. I lived in Europe and Asia for 30 years, as a teacher and librarian. Now I spend time writing - have completed two children's books and would like to try literary fiction.